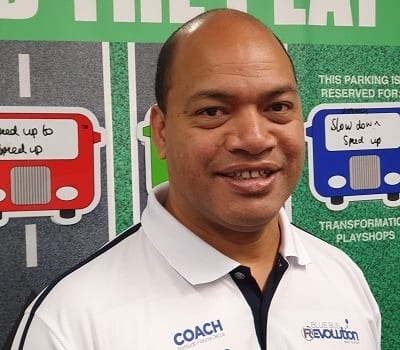 Adrian is an executive coach turned Blue Bus coach with over 8 years experience in the industry. His previous military background allowed him to lead teams to significant achievements in the most challenging of circumstances. He is passionate about helping individuals and organisations grow and develop a high performance Blue Bus culture.

WHY I’m a Blue Bus Coach

During an adventurous and challenging career with Navy, I was fortunate to discover what a great leader looks like and to be frank in those early days, not many stood out. One who did was Rear Admiral Sir David Martin, KCMG, AO, who later became Governor of NSW.

As a young Cadet Captain, I had the honour to report my team of midshipman to Sir David for ceremonial divisions and the next weekend he watched us play rugby against Army. The thing that radiated from Sir David was a genuine authenticity, warmth and ability to listen deeply and leave his ‘RAE’ (Rank, Authority and Ego) at the ‘door’.

He was a man who would casually chat with you on the sideline at full time and humbly pass on subtle leadership insights that stuck for ever. In short, he truly cared and inspired us to be the best we could be. We wanted to follow him.

Over the next 20 years I served with several other great leaders. Many of the best ones were not high-ranking officers like Sir David, they were sailors. But they all displayed similar traits. I learnt that great leadership can come from anywhere, it’s not about your status, rather how you cared for and inspired those around you to contribute to the team and its mission.

Later I was privileged to lead some men and women myself, and on occasion we faced situations together in military aviation where the adrenaline flowed fast, and our professionalism and teamwork was tested in the most extreme of environments. I had many ‘excellent failures’ along the way but also some successes, none more so than when I led a helicopter crew one dark night in a storm to rescue some yachtsman during the 1998 Sydney to Hobart yacht race.

When I left Navy, I became a leadership coach and was fortunate to witness the Blue Bus team facilitate a Red Green Blue Bus Play shop. It was a pivotal moment as I realised that in one session, this program engaged people to discover the leadership principles and values I had learnt over a life time in the Navy. The Blue Bus is based on three values, courage, trust and pride. I could see how people connected with it, learnt its language and how it began to rapidly shift their behaviours, mindsets and values towards a shared vision. Importantly too it was fun, and alchemised individuals to give the type of intrinsic discretional effort that is the hallmark of high performing teams.

The Blue Bus is at the cutting edge of leadership development and rapid organisational change and is transforming the way some of the world’s largest organisations are re-shaping their futures. I’ve seen it, I’ve lived it and now I’m coaching it proudly with the Blue Bus team. I have the best job in the world and am passionate about getting more people and organisations onto the Blue Bus! Which Bus are you driving today?